The TIN200 companies, which are ranked by revenue, now contribute the equivalent of 10% of all New Zealand exports, highlighting the integral part that the sector plays in the country’s economy. This places it third behind the contributions of dairy and tourism as a source of offshore revenue. Two thirds of the offshore revenue growth can be attributed to a robust 18.8% increase in TIN200 revenues in the North American market.

These are some of the key findings of the thirteenth annual TIN Report, an analysis of the performance of the top 200 New Zealand-founded high-tech companies in the areas of Information and Communication Technology (ICT), High-tech Manufacturing and Biotechnology.

The Report, which is produced by Technology Investment Network (TIN) and sponsored by New Zealand Trade & Enterprise, Callaghan Innovation, Spark, EY and AJ Park, was presented at an awards ceremony held at St Matthew’s in the City in Auckland this evening.

“This has been a defining year for the TIN 200 companies”, said TIN Managing Director, Greg Shanahan. “We’ve seen a sustained increase of around 8% in both revenue growth and exports but more significantly, the real story is in the integral part that the technology sector now plays in the country’s economy.”

TIN200 companies created 4,352 new jobs to employ over 43,000 staff globally with an average salary of just under NZ$84,000. “The broadening economic impact of this growth is creating opportunities throughout New Zealand society”, said Mr Shanahan.

Māori participation in the tech sector is growing and for the first time this year, the TIN Report covers the performance of Māori-owned or Māori-investment backed tech companies. Māori companies contributed an estimated NZ$94 million to total TIN200 revenue.

TIN200 growth has been concentrated outside of Auckland, with other regions outpacing the country’s commercial hub. This year has seen Hamilton, Wellington and the South Island regions leading TIN200 growth. These regions each grew by over 10% and collectively accounted for more than 60% of total TIN200 revenue growth, but only 40% of the total TIN revenue.

Additional key findings of this year’s TIN Report include:

Copies of the TIN Report are available in eBook or hard copy and can be ordered from www.tin100.com. Lists of the top ten and most promising companies in each category are listed below. A further regional breakdown is available on https://tin100.com/media/

EY Ten Companies to Watch: TIN100 companies with the largest revenue growth in 2017 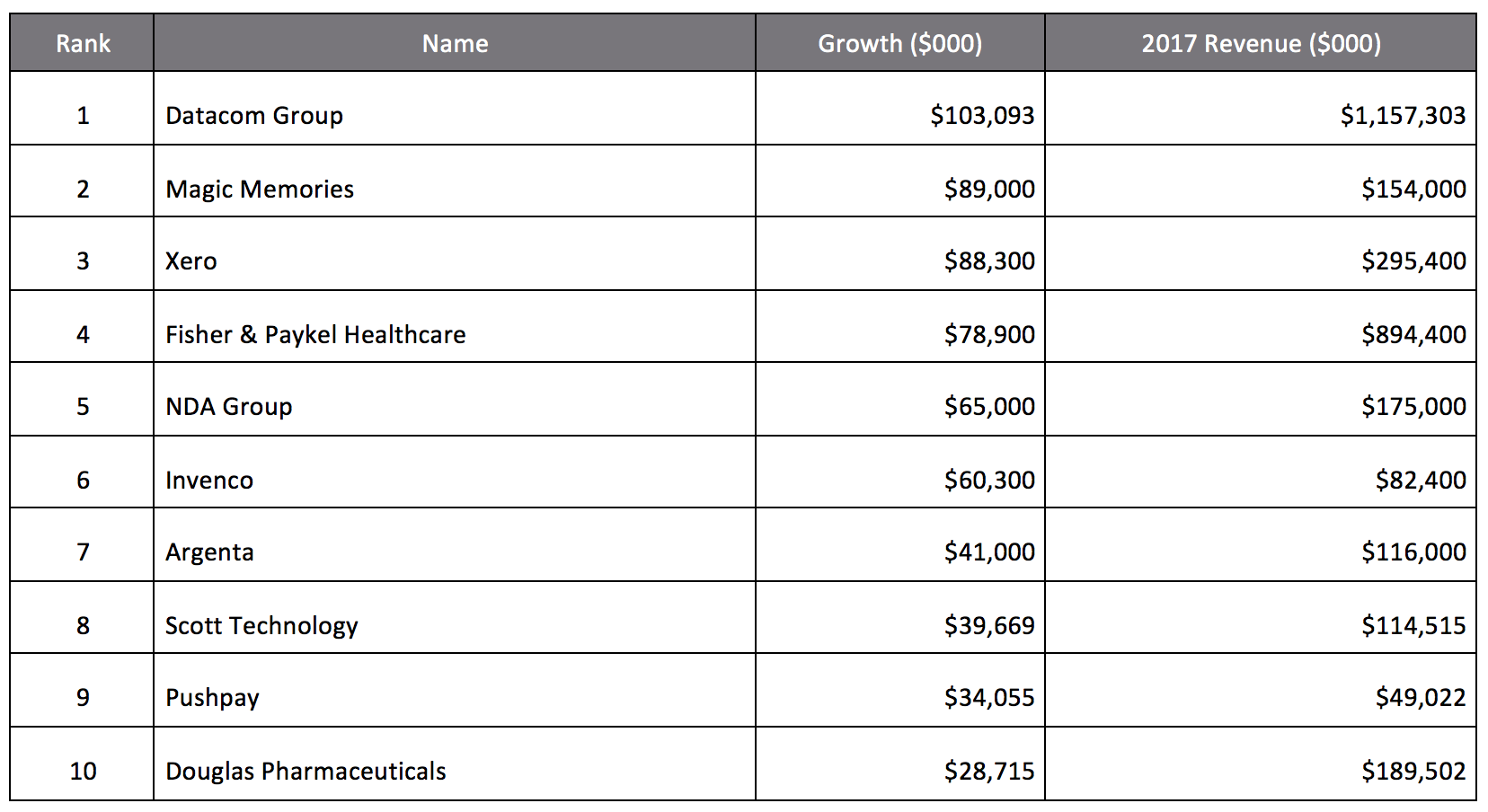 The EY Ten Companies to Watch list represents the TIN100 companies with the highest dollar value increase in revenue in the past year. Included are companies that have provided revenue figures and achieved a minimum growth of 5%.

Ten Hot Emerging Companies: The Next100 companies with the largest revenue growth in 2017 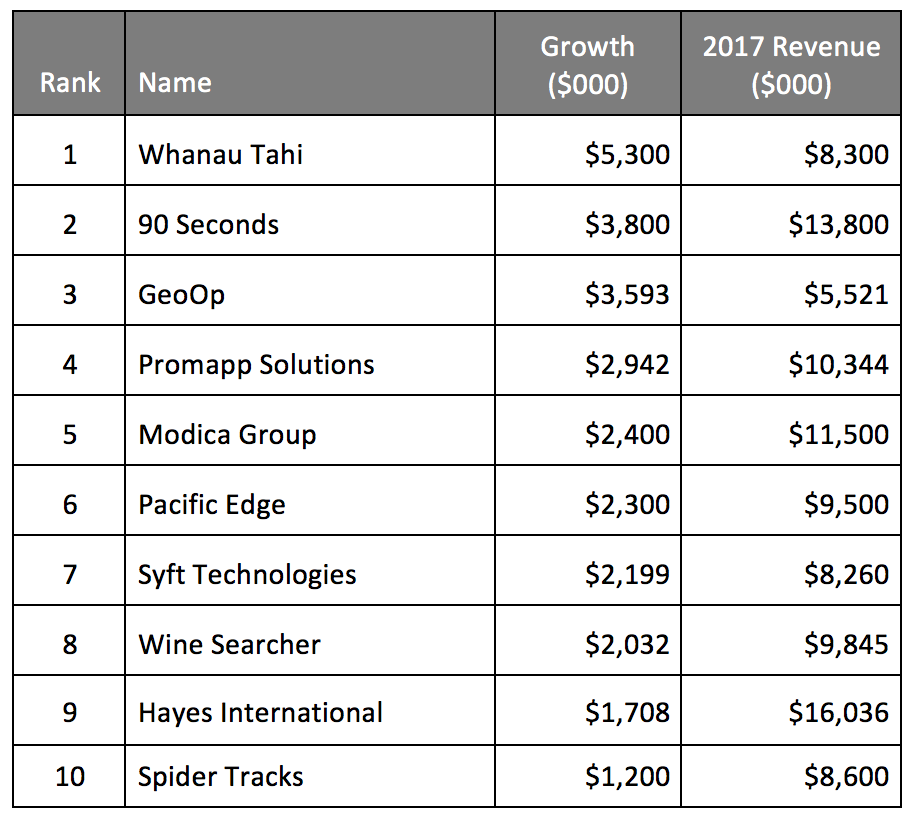 The Ten Hot Emerging Companies list represents the Next100 companies with the highest dollar value increase in revenue in the past year. Included are companies that have provided revenue figures and achieved a minimum growth of 5%. 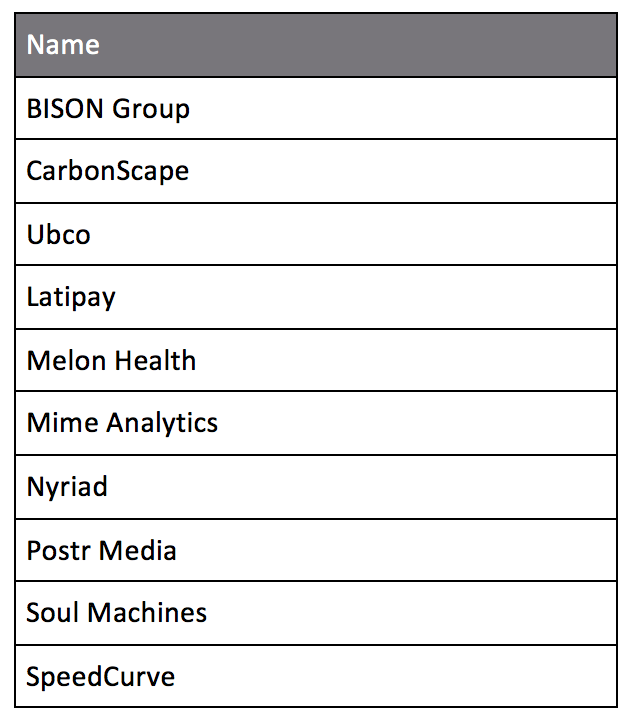 The award recognises promising TIN companies that are in an early stage of the company lifecycle (development, pre-commercialisation or commercialisation stages) from the 2017 TIN100 Report. These companies have been selected based on an assessment of the innovation of their technology and the potential market opportunity. They are not ranked.

About the TIN Report
The TIN Report is produced by Technology Investment Network with sponsorship from NZTE (New Zealand Trade & Enterprise), Callaghan Innovation, Spark, EY and AJ Park. The TIN Report is a critical reference for benchmarking the performance of New Zealand’s 200 largest globally focused technology companies. The size of the tech industry has grown significantly since 2005 and in recognition of this, TIN collated information on more than 600 companies in 2017. Find out more.