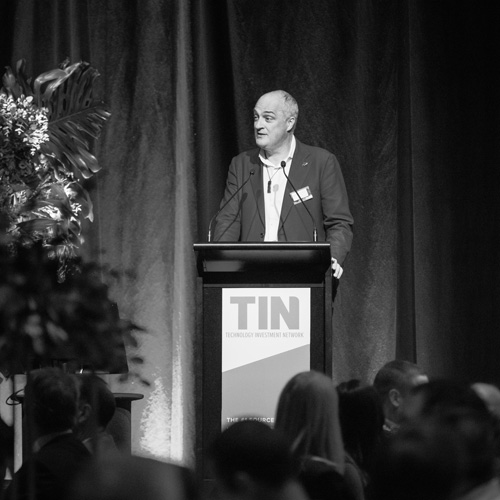 The 15th edition of the TIN Report was unveiled to a 250-strong crowd at Auckland’s Skycity last week, at an event marked by the announcement of record-breaking revenue figures for the NZ tech sector, as well as an initiative that will see tech becoming an increasing force for good in New Zealand.

With NZTE’s David Downs as MC, the night was peppered with good humour, camaraderie and an upbeat, distinctly celebratory tone. “Our isolation drives us to be innovators,” said Prime Minister Jacinda Ardern in her congratulatory video message that opened the night, “and the search for innovation, particularly in technology, never stops.”

In his opening address, the Hon. David Parker, Minister for Trade and Export Growth, complimented TIN on the scale of the launch event and remarked on the humility of its attendees, saying that the “people who are here are grounded because they know that, with the journeys they’re on, today’s rooster can be tomorrow’s feather duster.”

Minister Parker said the contributions that the tech sector makes to our country’s economy are highly valued, and that the sheer size of the opportunities the sector presents should be viewed across a myriad of sectors.  “It’s the duty of all of us and certainly of every government to ensure we have the settings right to maximise the share of opportunities in the world,” he said.

He went on to say that the tech industry’s future is tied to productivity, telling the audience that “your innovations are the drivers of productivity growth.”

“We know that it helps not just in our cities, but in our regions too, it helps ease pressure on the environment and enhances our reputation around the world.”

He congratulated the audience of NZ tech sector representatives on their combined success in producing record-breaking revenue and export figures, and in particular called out the growth in jobs which he said was “incredibly impressive” – the two-thirds growth in offshore employment showing how “your tentacles are spreading out into the world.”

Greg Shanahan then delivered the top-line findings from the 2019 Report, saying that “the success of the tech sector is not so much in the tech itself but in the new business models that are enabled by tech.”

He saluted the major milestone reached by the Fintech sector in breaking through the $1B mark for the first time to become the fifth largest sector in this year’s TIN Report, saying success was not just confined to one company, but rather was part of “a movement.”

As TIN celebrates its 20th anniversary this year, Mr Shanahan said that the organisation is looking to make an enhanced commitment in 2020 and beyond towards making tech companies an increasing force for good in New Zealand, utilising their talents and robust networks to help address economic disparity and bring about genuine societal change.

“In 20 years’ time, when we are looking back on another two decades of evolution of the New Zealand tech sector, I’m confident that we’ll be able to trace the threads back to the TIN Report of 2019 and see how the successes of today translated into the strong foundations of a tomorrow that brought benefit and prosperity to all,” he said.

Maru Nihoniho, Founder and Producer of gaming company Metia Interactive, joined Greg O’Grady, Co-founder and Chief Scientific Officer of The Insides Company (formerly known as Surgical Design Studio) on stage to discuss how tech can be good for people, and good for the world.   One of Metia Interactive’s most popular games is Sparx -- a self-help tool that teaches young people the key skills needed to help combat anxiety and depression – and Maru said she was humbled by the feedback she’d received from all over the world saying what a difference the game had made to young people’s lives.

Greg O’Grady, a consultant colorectal surgeon, has a passion for developing devices to aid the care and rehabilitation of bowel cancer patients – with New Zealand having some of the highest rates of the disease in the Western world.  “We can amplify what we do with technology to a huge degree,” said Greg.  “You can’t under estimate the uplift that the health tech ecosystem has given to the general community.”

Rebecca Tohill, CEO and Founder of professional services firm Fusion5, was profiled as a Maverick in this year’s TIN Report and joined David Downs on stage for a discussion around the value of people in an organisation.  She attributed a lot of the success her company enjoys to the people she works with.  “I love the people that I work with,” she said. “Hiring and attracting talent is a large part of what I think about every day.  What I think makes us attractive is the interesting and specialised work that we do; but we’re also diverse, inclusive and down to earth.”

“The TIN Report shows exemplars of success,” commented David Downs.  “Opportunities may not be evenly distributed across the ecosystem, but talent is.  The beauty of the tech sector lies in its meritocracy.”

A large part of the evening was dedicated to the presentation of awards based on revenue growth within the TIN100 and Next100, along with recognition given to the top ten most promising Early Stage Companies. Dr Tim Benbow of EY presented the EY Ten Companies to Watch 2019, Lisa Cooley of Absolute IT presented the Absolute IT Supreme Scale-ups awards, while Mark Petersen, CEO of NZX – a new addition to the TIN stable of sponsors -- presented the awards to the NZX Early Stage Companies 2019.   A detailed breakdown of the winners in each category is available here.

Mahmood Hikmet, COO of HMI Technologies, presented the Rocket Award, which is awarded to the company that has gained  the most places in the TIN200 rankings for the year.  This year’s recipient - video production company 90 Seconds -- accepted the award via video link here.