TIN200 exports grew by 5.3% in Asia in the 2017 financial year. This market now contributes $0.52B of total TIN200 offshore revenues, and the TIN200 employ 1,660 staff in the region. China’s strong GDP has particularly benefited our High-tech Manufacturing companies, with this primary sector growing by 42.4% in Asia in the past year. Investment in TIN companies by Asian venture capitalists is also on the rise. Recent examples include Baidu’s investment in 8i, Jubilee Capital Management’s investment in Latipay, and the funding of Postr Media by a number of Singaporean investors.

At the October TIN Report Launch event at the NZX offices in Wellington, Pukeko Pictures’ CEO Clive Spink, and Postr COO Roger Shakes, talked about the inroads that their respective digital media companies are making into the Asian market.

International entertainment production and IP development company Pukeko Pictures was established in 2008 by Sir Richard Taylor, his wife Tania Rodger and award winning children’s author Martin Baynton. The company generates content for a global audience, working with partners from all over the world. It is currently in production on three shows: One with ITV, one with Red Arrow and Gold Post (from Germany and Australia), and it has also just launched a kids’ TV show in China. Pukeko Pictures is officially the first company outside of China to work as a co-production partner in this market.

“Capital is one thing, but it’s actually all about getting access to other things as well.”Clive Spink, CEO, Pukeko Pictures

Clive stated, “We’ve made a real push in the last three years into China, and we are doing a whole lot of things there. We are building indoor kids theme parks. We launched a kids’ show that we’re leveraging with a billion branded yoghurt bottles dedicated to our show, through an eight year strategic deal with the largest beverage company in China – so we’re looking really at brand extensions to the content that we produce, and how that gets shared and leveraged across the globe.”

Spink also explained that the company’s Chinese partners have a shareholding in an Over-The-Top-Player (“sort of like Netflix”), that’s currently delivered to about 30 million homes through China Mobile. “Pukeko Pictures is working toward effectively delivering content through avatars of the characters it creates, which delivers amazing visibility for our brands.” 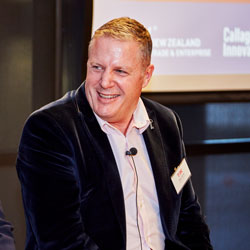 Pukeko Pictures has enjoyed great support from NZTE whilst working in the Asian market. “When you’re going into territories like China, especially, having that level of government relationships is actually hugely important.”

When questioned on future capital needs, Spink outlined that the firm’s next steps are probably more about integration and getting investment from people that bring with them distribution capability and market access. “Capital’s one thing, but it’s actually all about getting access to other things as well,” he stated. Pukeko Pictures has a mix of founder and private equity funding, and it’s shareholder base is mainly local and very supportive. Clive noted that “future capital may potentially come from offshore sources that provide areas of growth and vertical integration for us.”

Postr was founded in 2014 by a 26-year old entrepreneur, Milan Reinartz. The company puts advertising on Android lock screens and partners with Telcos around the world to distribute sponsored data services to consumers. Subscribers of these Telcos can download the apps or activate the feature from existing apps and register to receive free data just for hosting the ads on their lock screen. Shakes explained, “For us there’s an opportunity to establish the mobile device as a more effective advertising channel that benefits consumers as well as brands.”

“We wanted to explore how we could get some smart money – and by smart money I mean people that come with some connections, some intelligence, some insight into the Asian region as well.”Roger Shakes, COO Postr

Postr has a interesting business model, as described by Shakes. ”We partner with Telcos as enterprise partners and through that partnership we access their consumers, who eventually become our customers. The way in which it works is a Telco would generally “white label” the app that we provide or integrate our technology into their existing apps. Users are then given a reward in the form free connectivity – data or minutes – as long as they host the ads on their device. It’s a little bit like the experience we have with television: We watch televisions, we see ads, we get free content.” 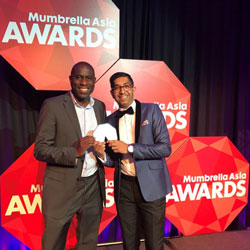 Postr is currently live in New Zealand with Skinny, Australia with Optus, Indonesia with 3 Hutchison and telecoms giant Telkomsel, MEO/Altice in Portugal, and O2 Germany – clearly the larger opportunity for the company is in large overseas markets. Roger says, “We’re quite active in Southeast Asia and also in Europe already, and we’re about to expand into Latin America, the Middle East and Africa.”

In terms of strategy, Postr realised early on that Asia was going to be a particularly big market for its solution. Shakes acknowledged the importance of seed funding received from both Angel HQ in Wellington, the ICE Angels in Auckland and NZVIF, which helped get the company moving. Of the firm’s more recent offshore activity and Asian investment, he stated, “We wanted to explore how we could get some smart money – and by smart money I mean people that come with some connections, some intelligence, some insight into the Asian region as well… We’ve now got a really good cohort of investors from the region who are not only supporting us financially, but also giving us guidance, leads and insight into how to operate within those markets.”

Roger noted that almost all previous investors have invested again because they’ve seen that the company continues to deliver on its targets to grow globally. More importantly, it is an acknowledgement that what Postr is trying to do within the broader sphere of advertising is to shift some of that spend from television, radio and print into mobile. Shakes noted, ”If you can do that and provide a channel that is quite active in terms of engagement with the audience, then you’re more likely to get a scalable business across all territories.”